At the start of the summer I thought I'd have far more time to be blogging and instead I seem to have neglected my little old space over here somewhat. Ive been existing more in that live in the moment giddy world of Instagram. She's seduced me, but hasn't won.

I really intend to get back on top of that very soon.
I think a spot of autumnal sprucing up here and blog visiting are most definately in order.

Now what have we been up to.

Well one day we went on a train. The train stopped at Cambridge and off we went for a wander. I took my knitting on the journey dreaming of lazing on a punt later in the day. Miss Rosey refused to get on the punt. End of that idea. 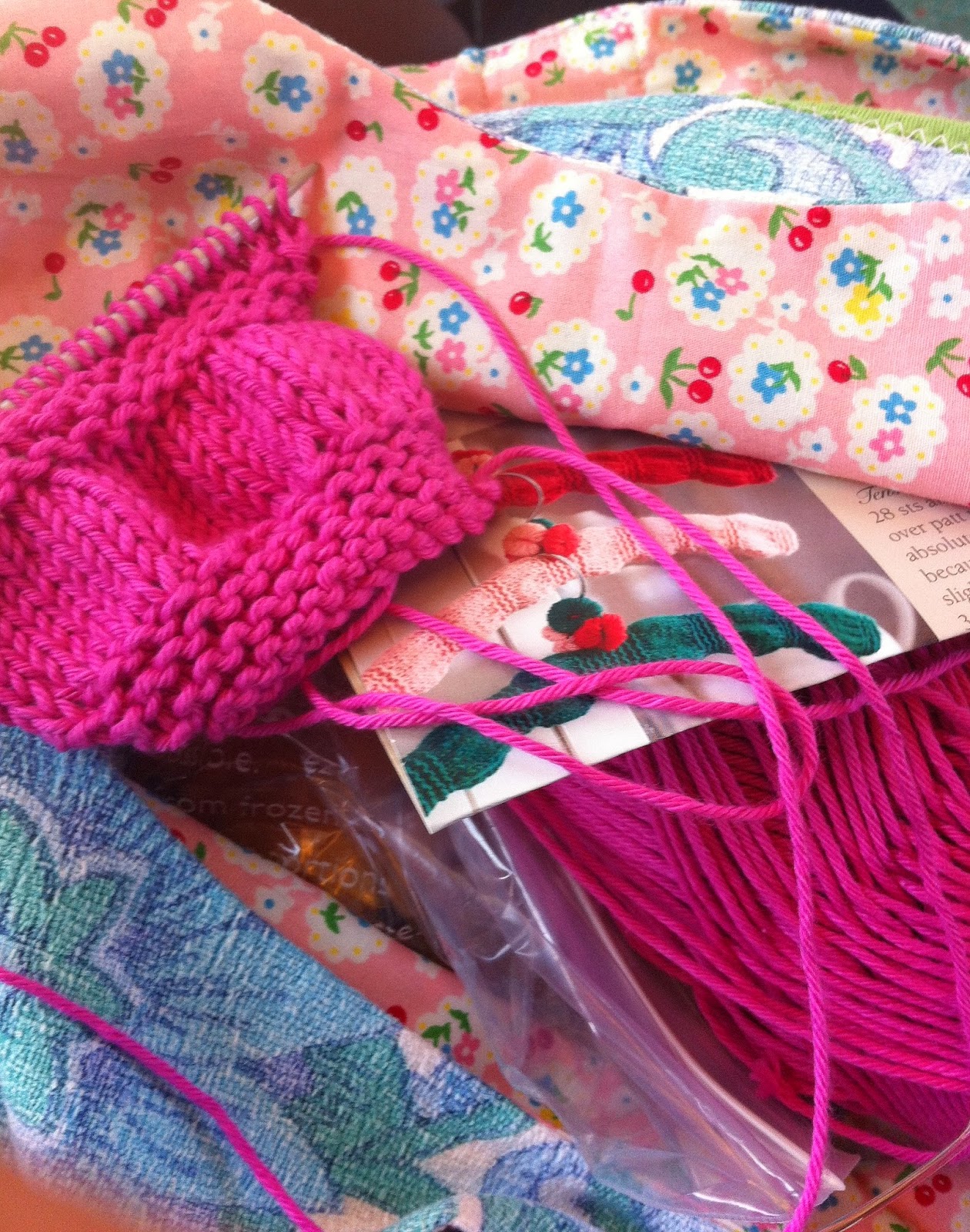 Next Monday my eldest girlie will be 14. She's finding her own feet these days and very much deciding if she wants to come on an adventure with us or not.  Thankfully it's not us that she's avoiding, just the things we want to do. So it's all change here and sometimes we're a family of 3 and sometimes a family of 4. 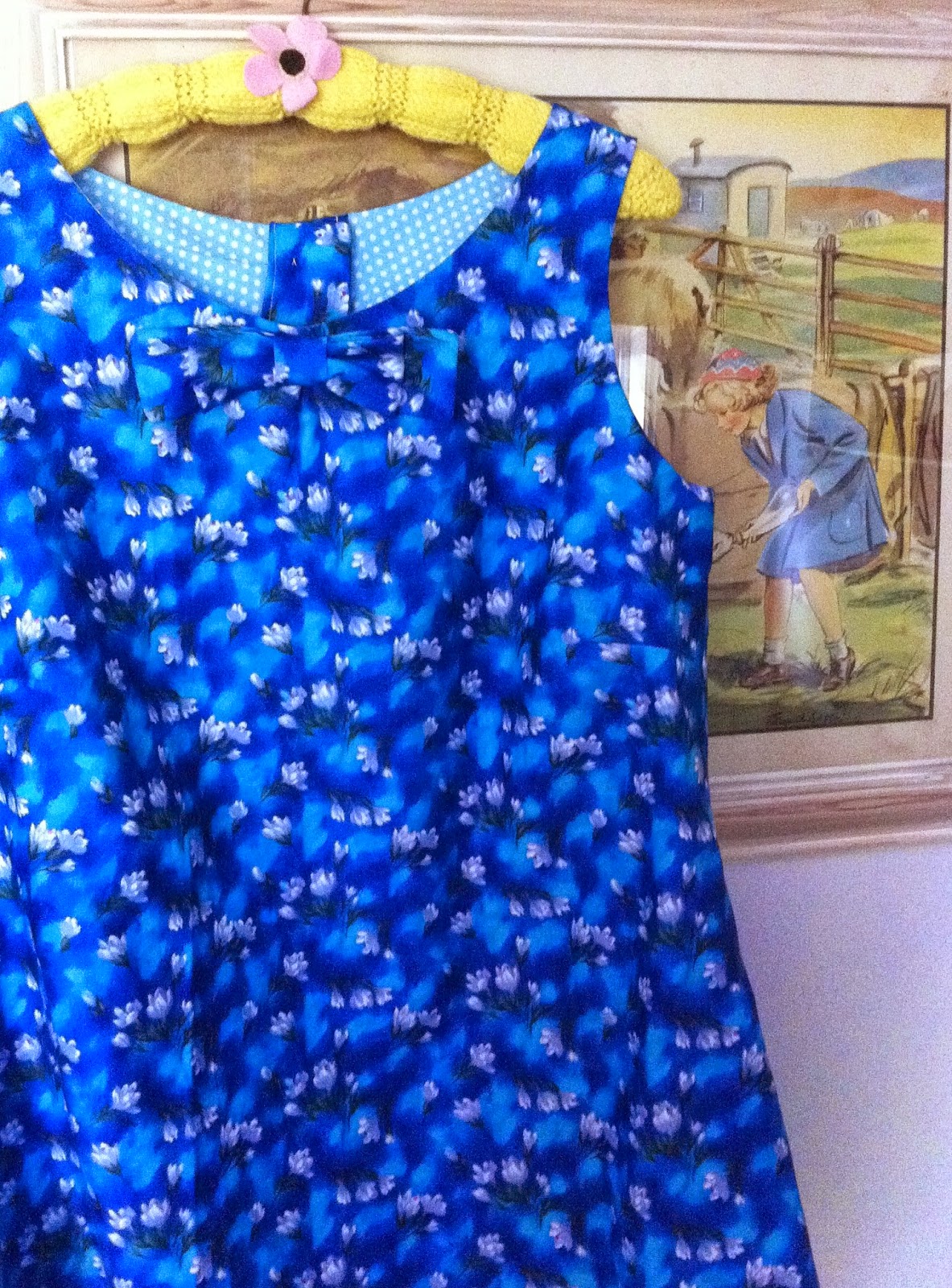 Around our adventures there's always been time for sewing. 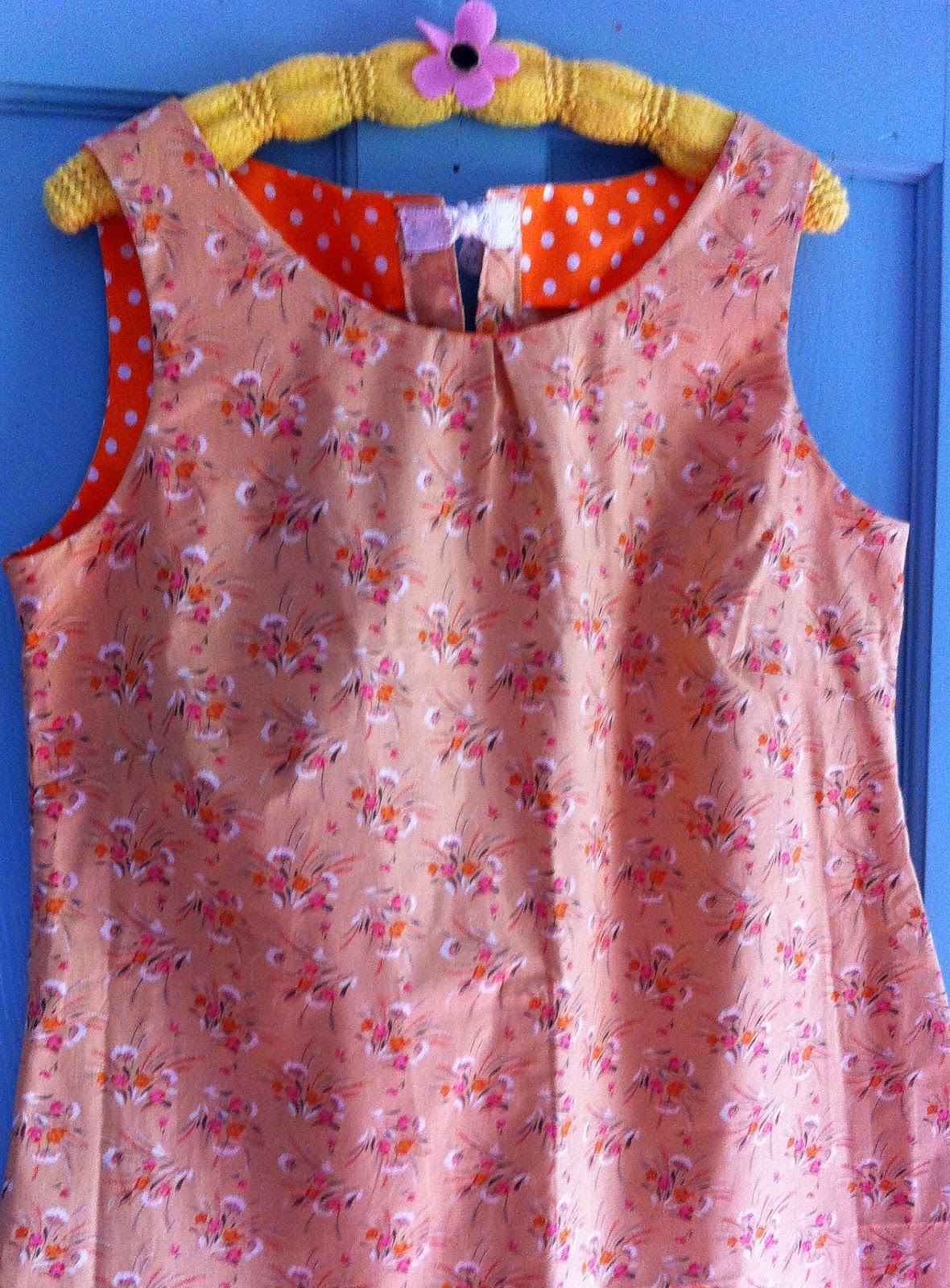 Then there's a new addiction of mine.
Lampshade kits.

These are so easy to use and totally addictive. 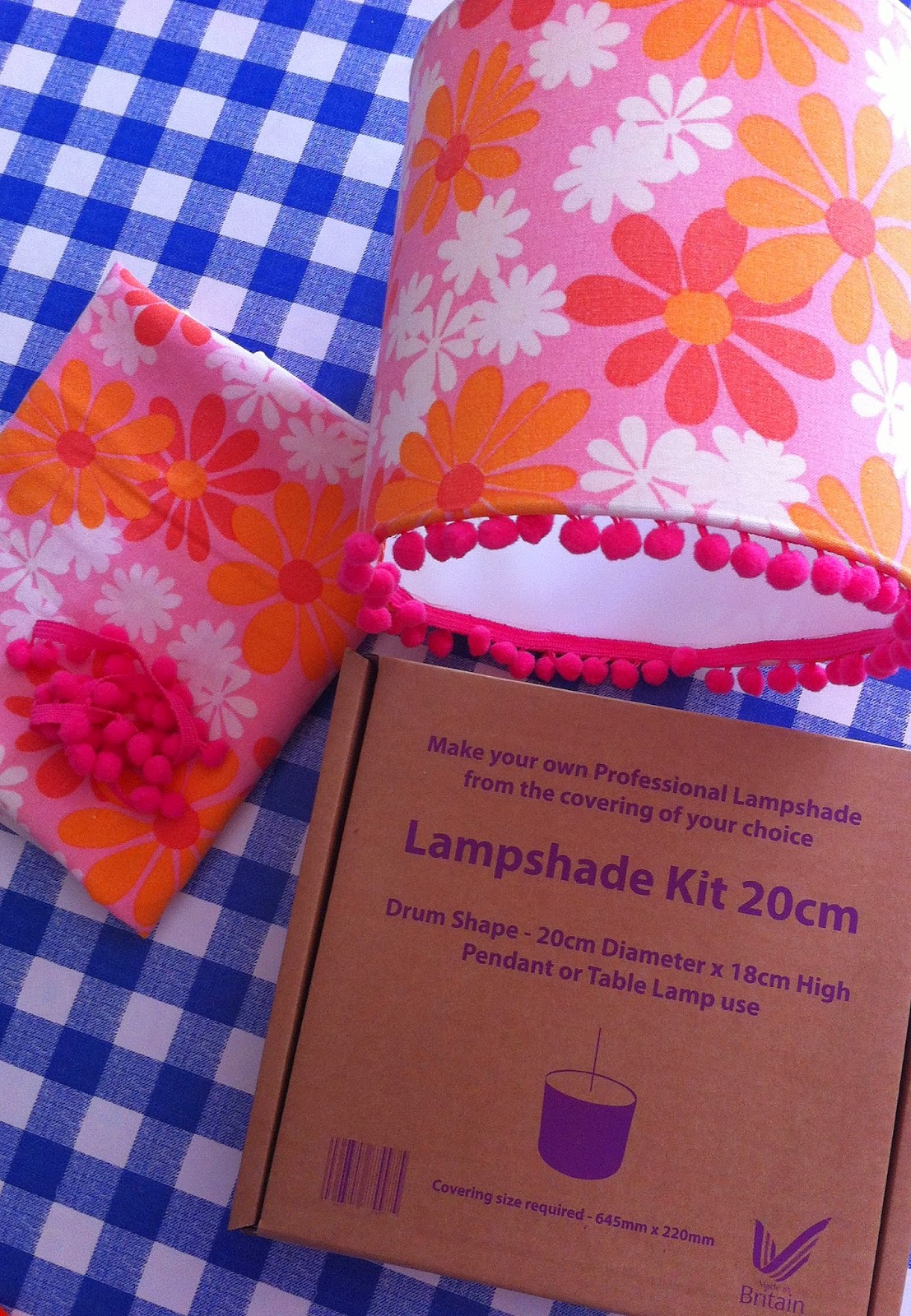 Two smaller ones made for my girlies rooms.
I won't stop until each lamp has had a re-vamp. 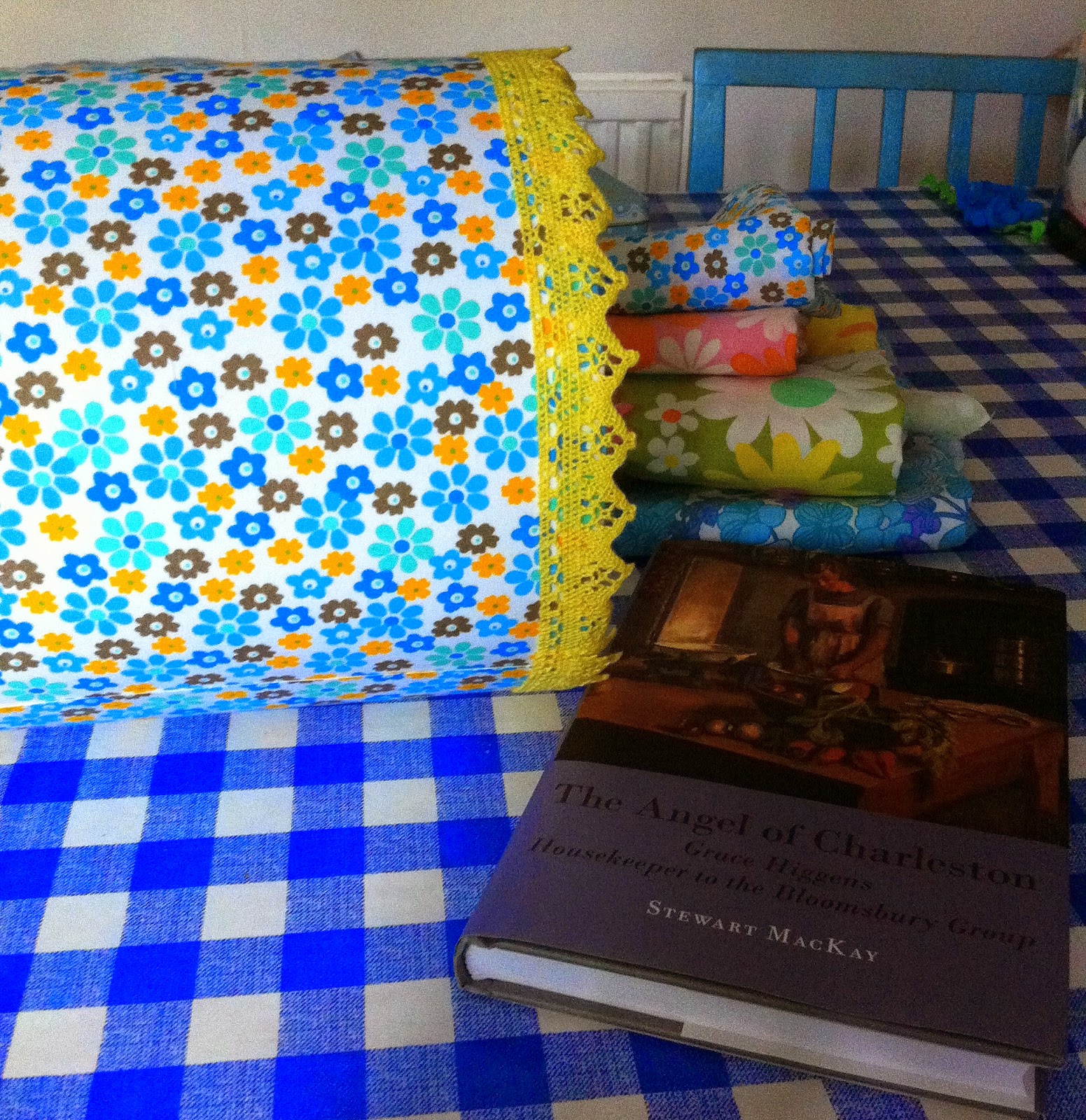 We've had a week away at my mum's while my man worked and then he had more time off to play with us.

Summer stopped that week and hasn't really been back since.

Under a bed of pebbles down below and an Aran Cardi and scarf up top when we picnicked at the beach.
Laying down out of the wind was much warmer too. 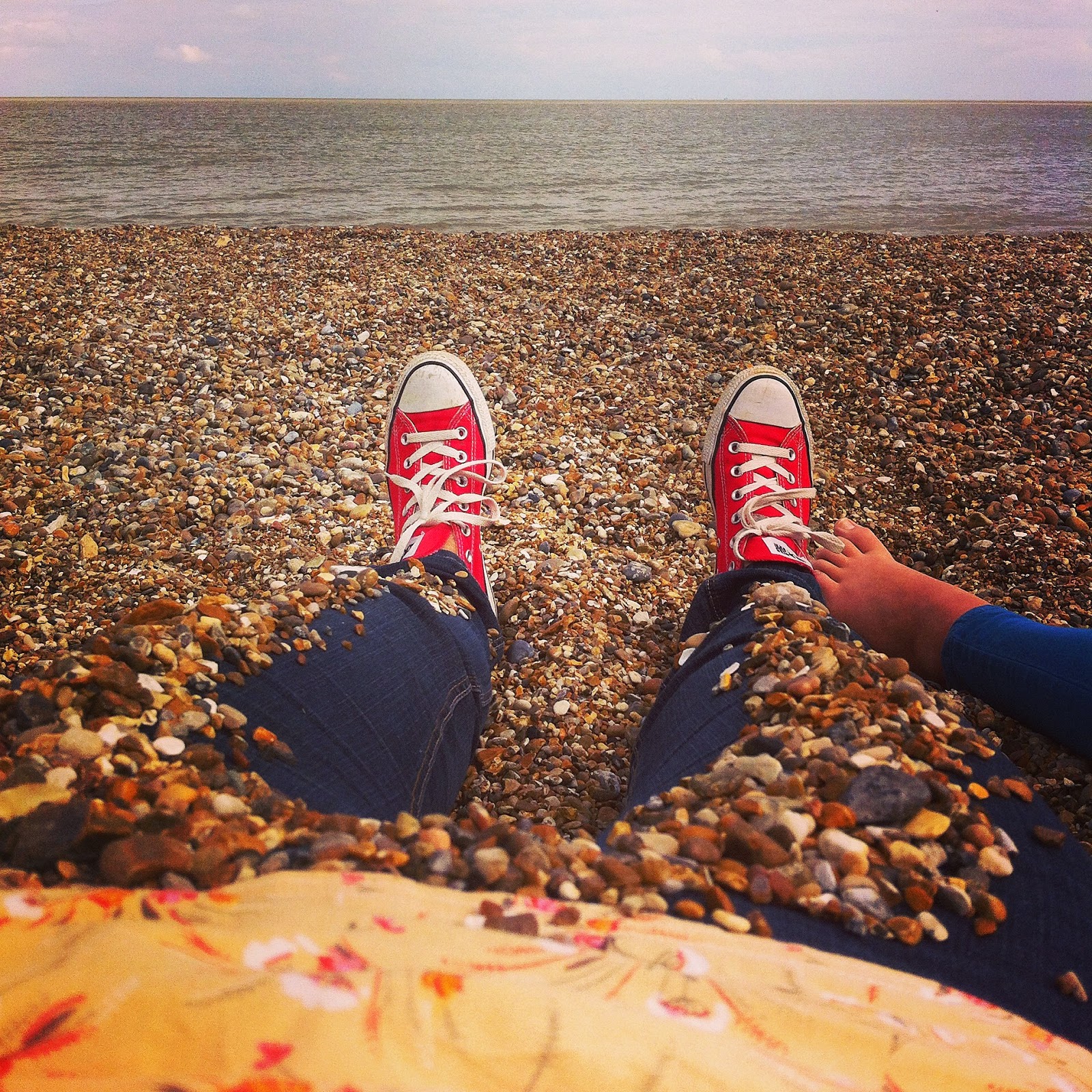 It was much warmer on the cliffs exploring Greyfriars above Dunwich beach. We also had a pootle in the tiny village museum. 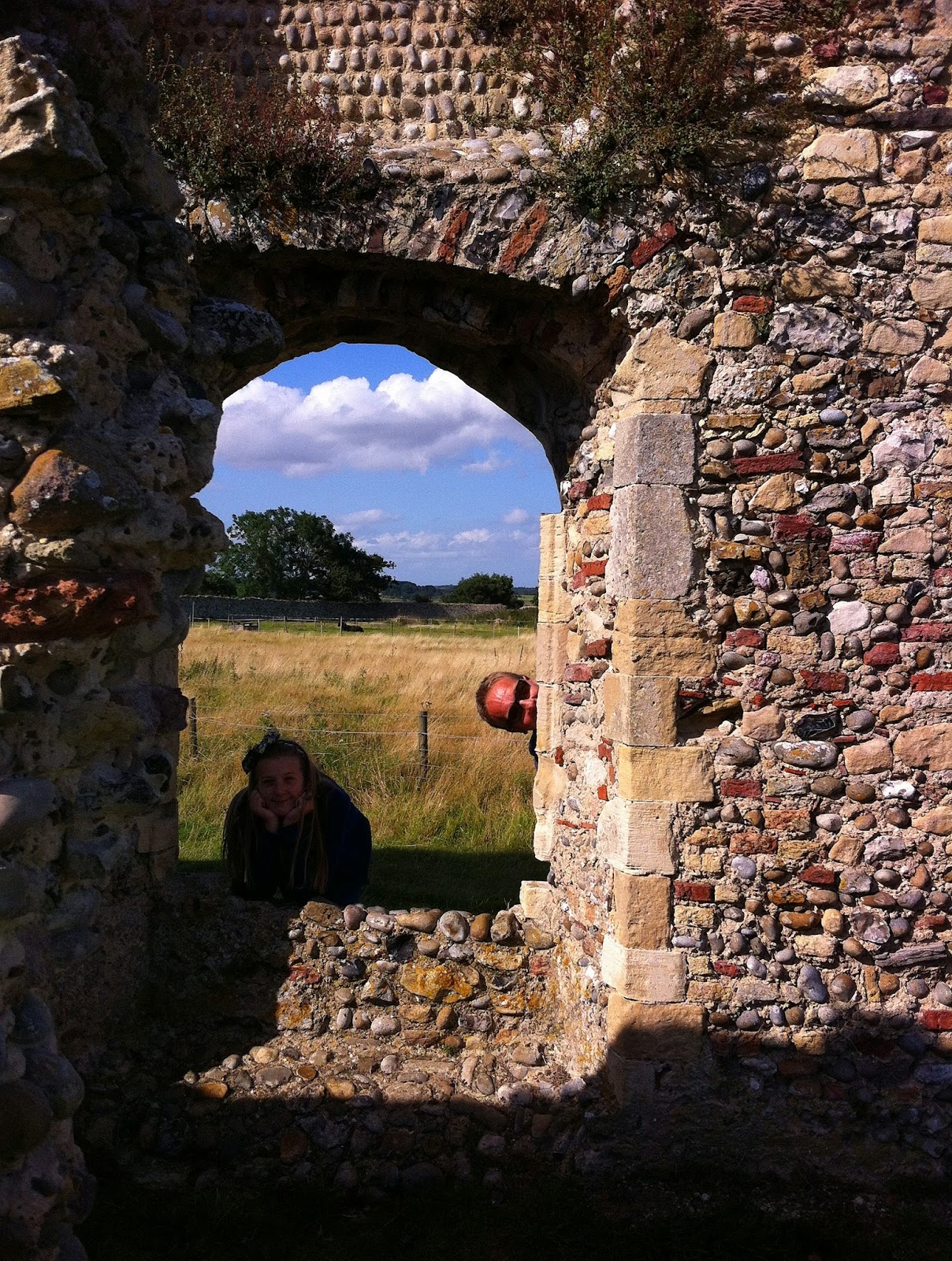 In the middle of the week blue skies beckoned and so we whizzed off to see the Red Arrows flying over the sea at the Cromer Carnival.

Then we took our picnic off to Felbrigg Hall to get away from the crowds and get the most of our NT membership. Miss Rosey was very keen to see inside the house - yay as I love this home. 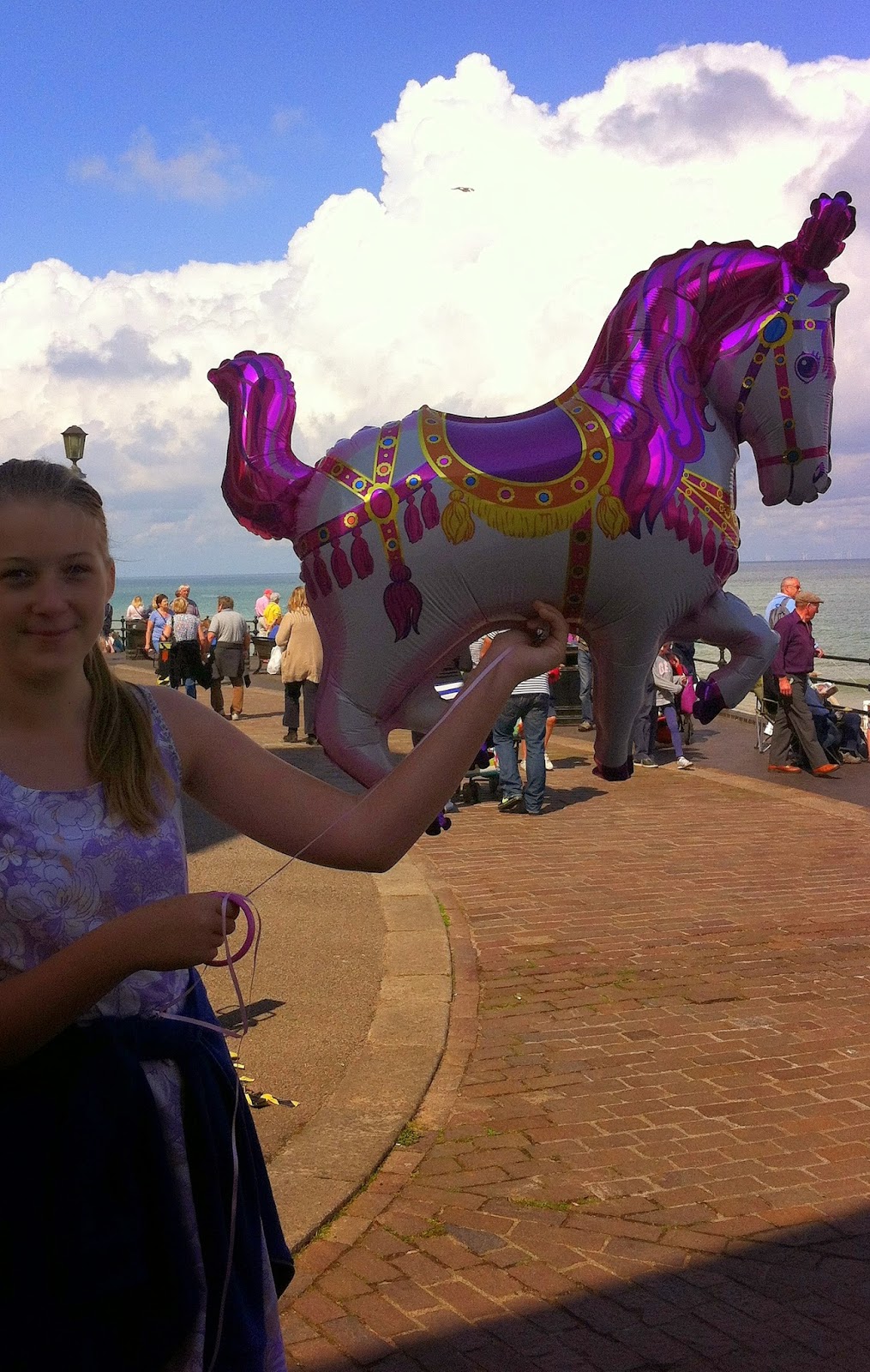 The following morning we were up bright and fresh to drive down to London. We had fancied visiting the Imperial War Museum to see the new WW1 exhibition. Not a great decision looking back on it.

At the moment a lot of stressful work related wranglings are going on. Hands feel tied, frustrations and fears - all of those things. We needed more laughter and a big dose of war with the Holocaust thrown in wasn't ideal. I was fascinated by it as a child. A close uncle had been part of the Medical Corr finding Belsen and then stayed on in Europe for years after helping in the refugee camp. Our girls were interested and handled it really well. I was worried as I knew exactly what they would be about to see, but I didn't want them protected from it either as it's so important to know what happened and still happens today.

There was a strange moment when they were looking at the Aryan Genetics part and people stared. There were my three 6ft and over and blonde.

In one of the films at the end I got to see the lovely lady who had spoken to Miss Rosey and her class in the Golders Green Synagogue a few weeks back about her experiences as a German Jew. 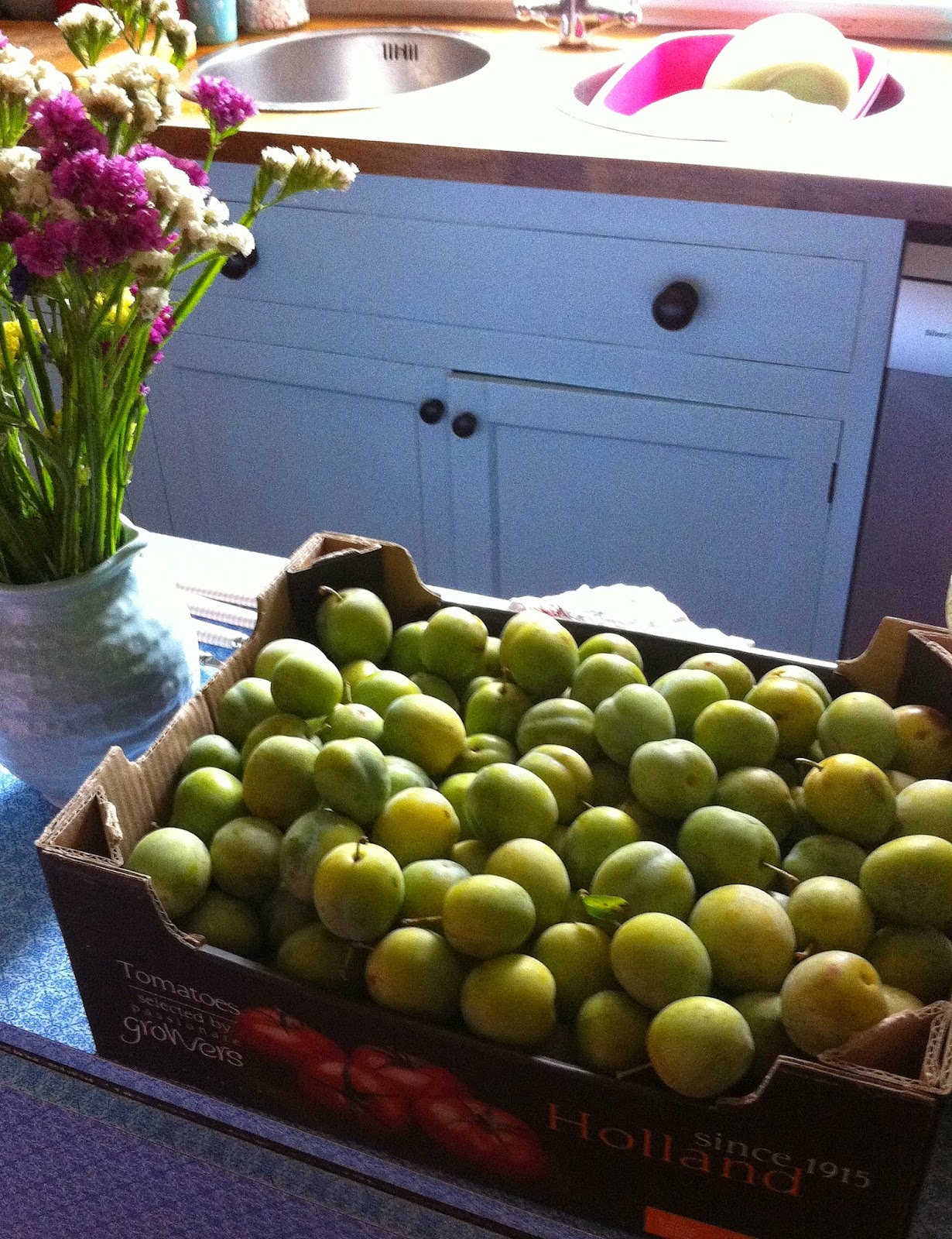 How strange it seems after that to be talking about making jam.

Well that's what I did and so I will. The week before Miss Millie was born was Mother's Day I was given a Greengage Tree. 12 years later it's thriving as you can see.

I've never ever made jam before, but with this bumper crop there's only so many crumbles and tarts you can face eating. 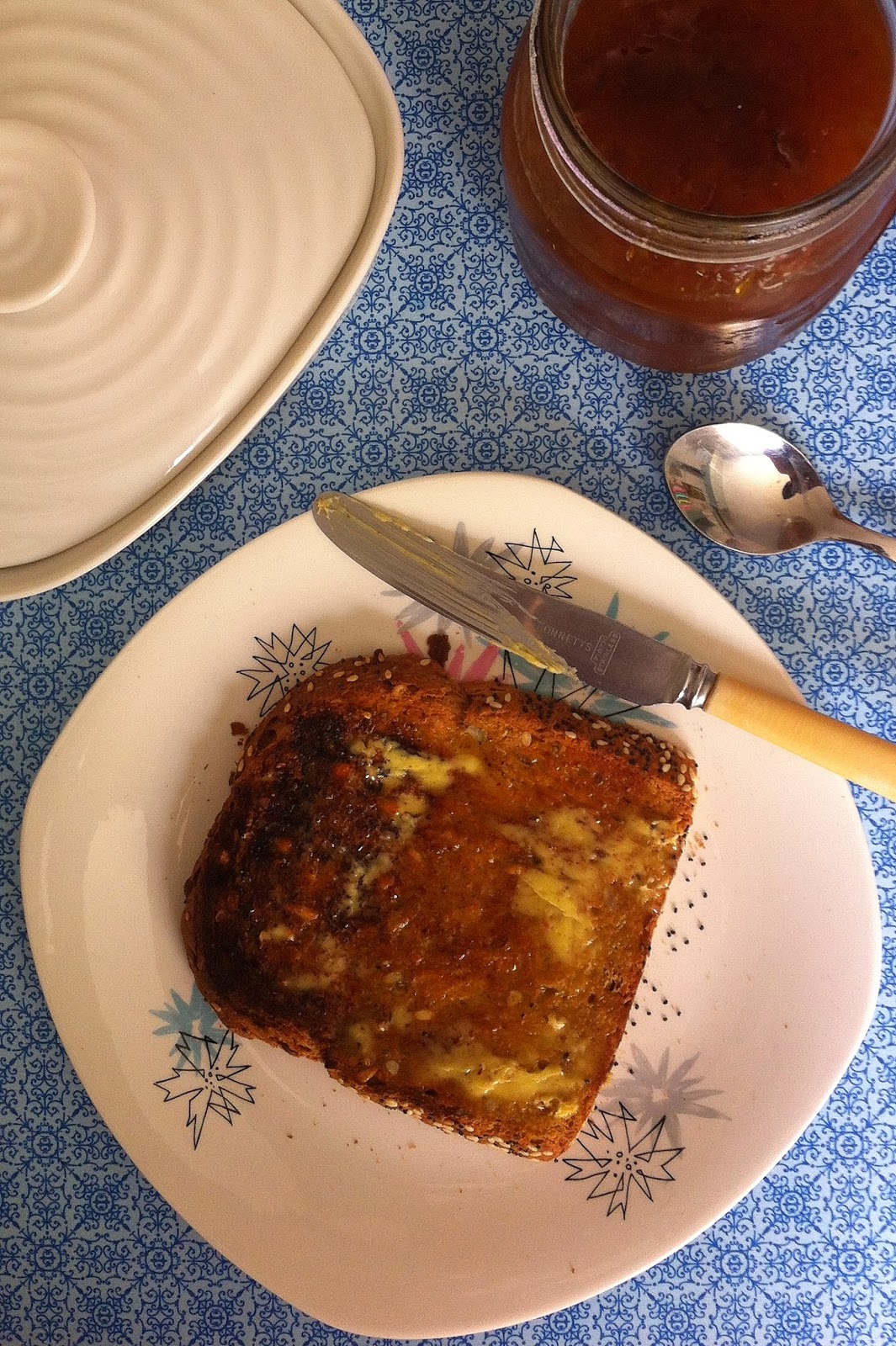 I can't believe I managed it.
Six jars of soft delicious jam. One burnt and blackened hob.

Thanks for reading and stopping by. I really enjoy reading your comments and will get back to replying very soon I promise.
at August 26, 2014 24 comments:

These are the Days

Well I didn't plan to stay away for that long, it just kind of happened.
Sorry about that if you've popped by here to see what's been going on.

Well what has been going on?

We've been having a lovely summer, simply enjoying time together. Time off scarily means no pay packet until to November, such is the way with sessional teaching contracts. I'm putting that to the back of my mind though as these are precious days. 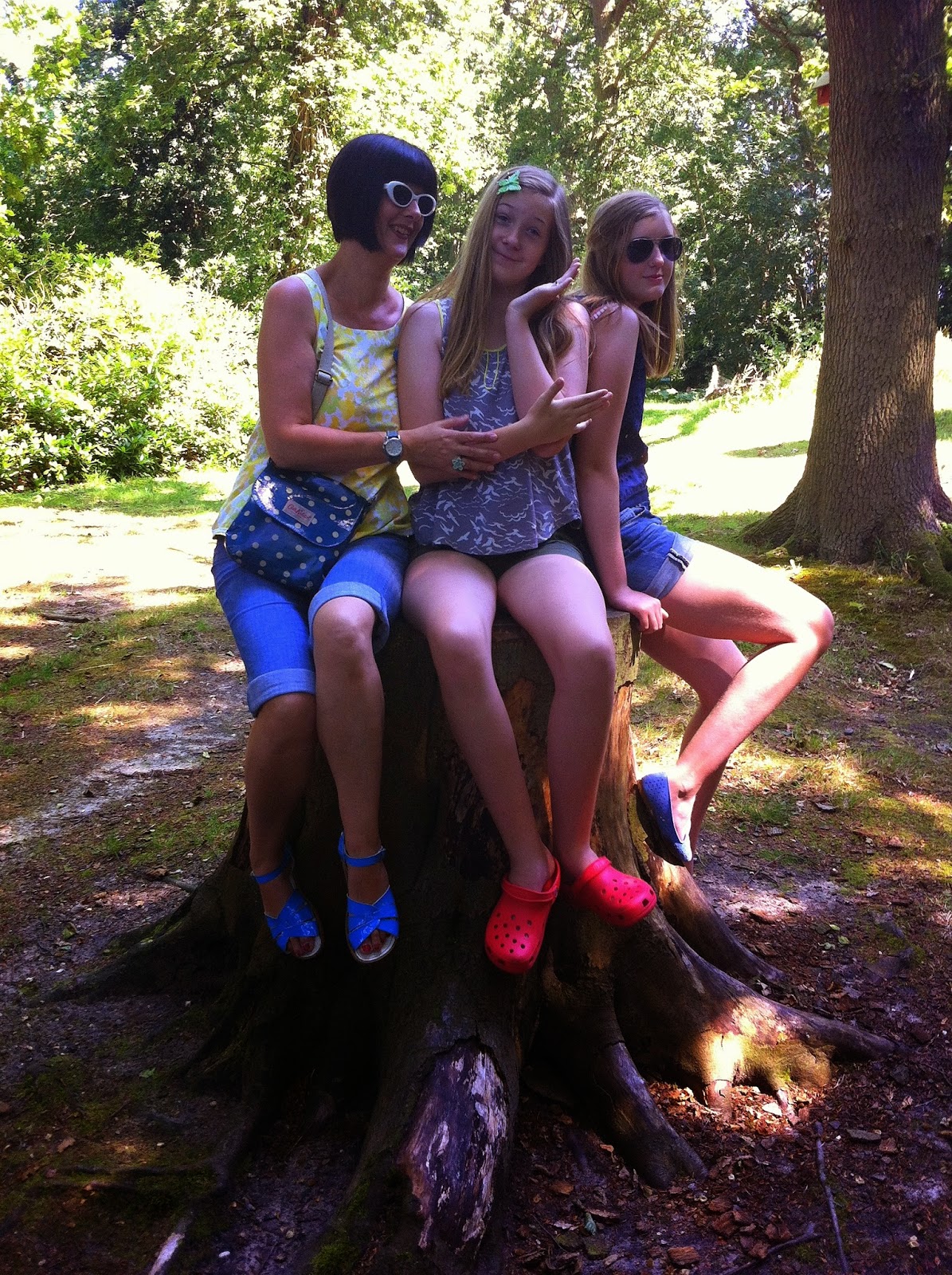 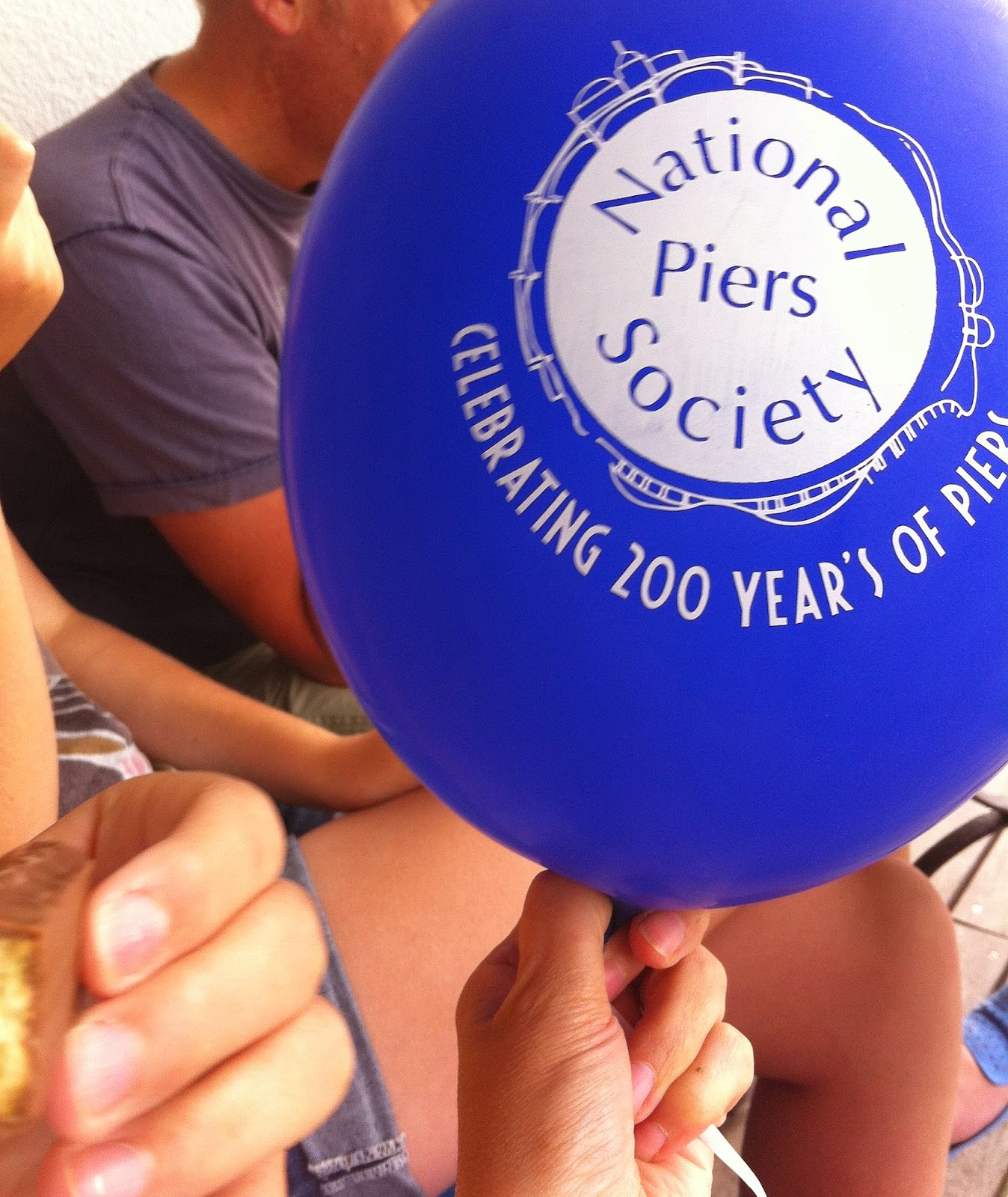 Picnics, swimming and lazing by the seashore have all been most pleasant, 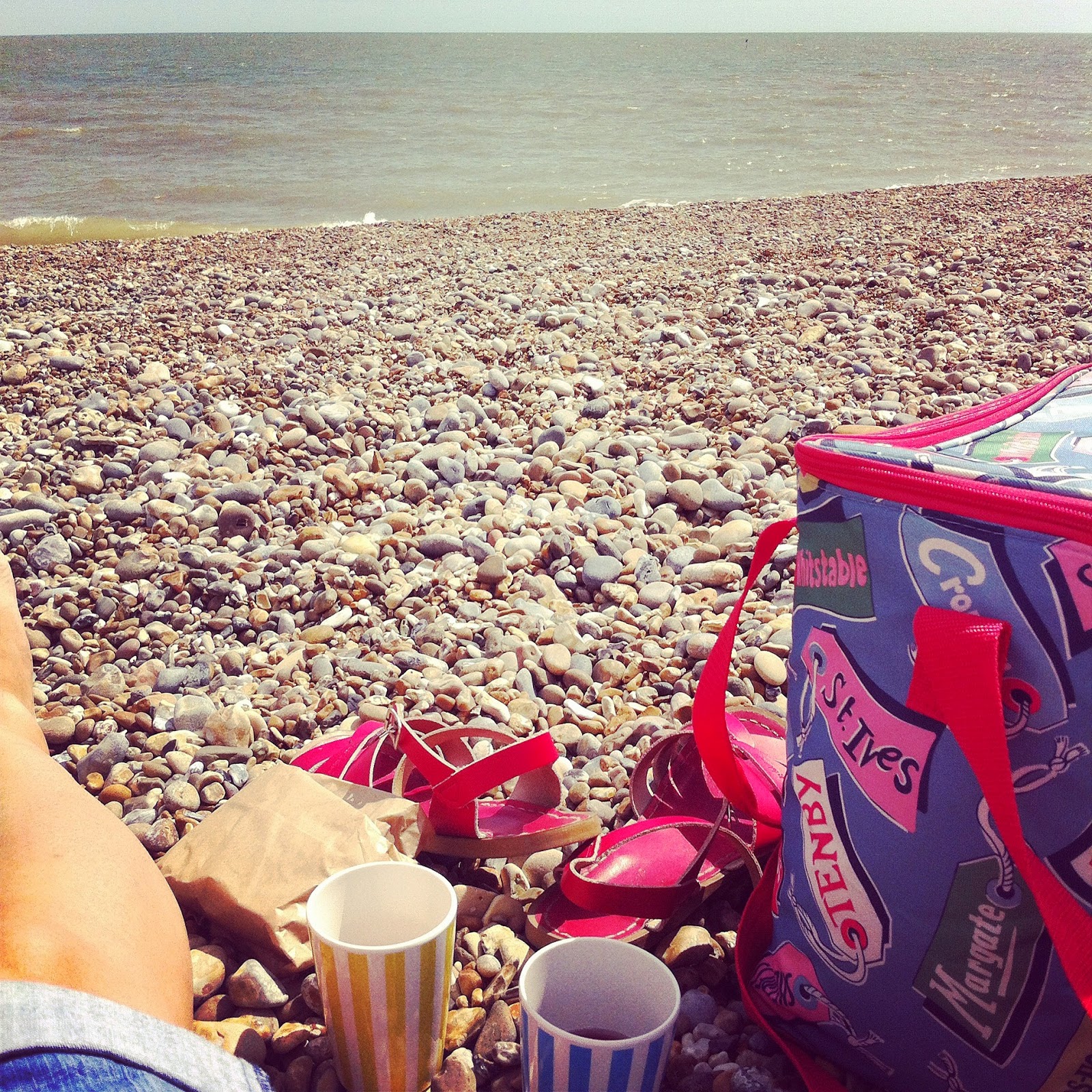 We always feel the need to go exploring afterwards and then reward ourselves later with a cream tea. 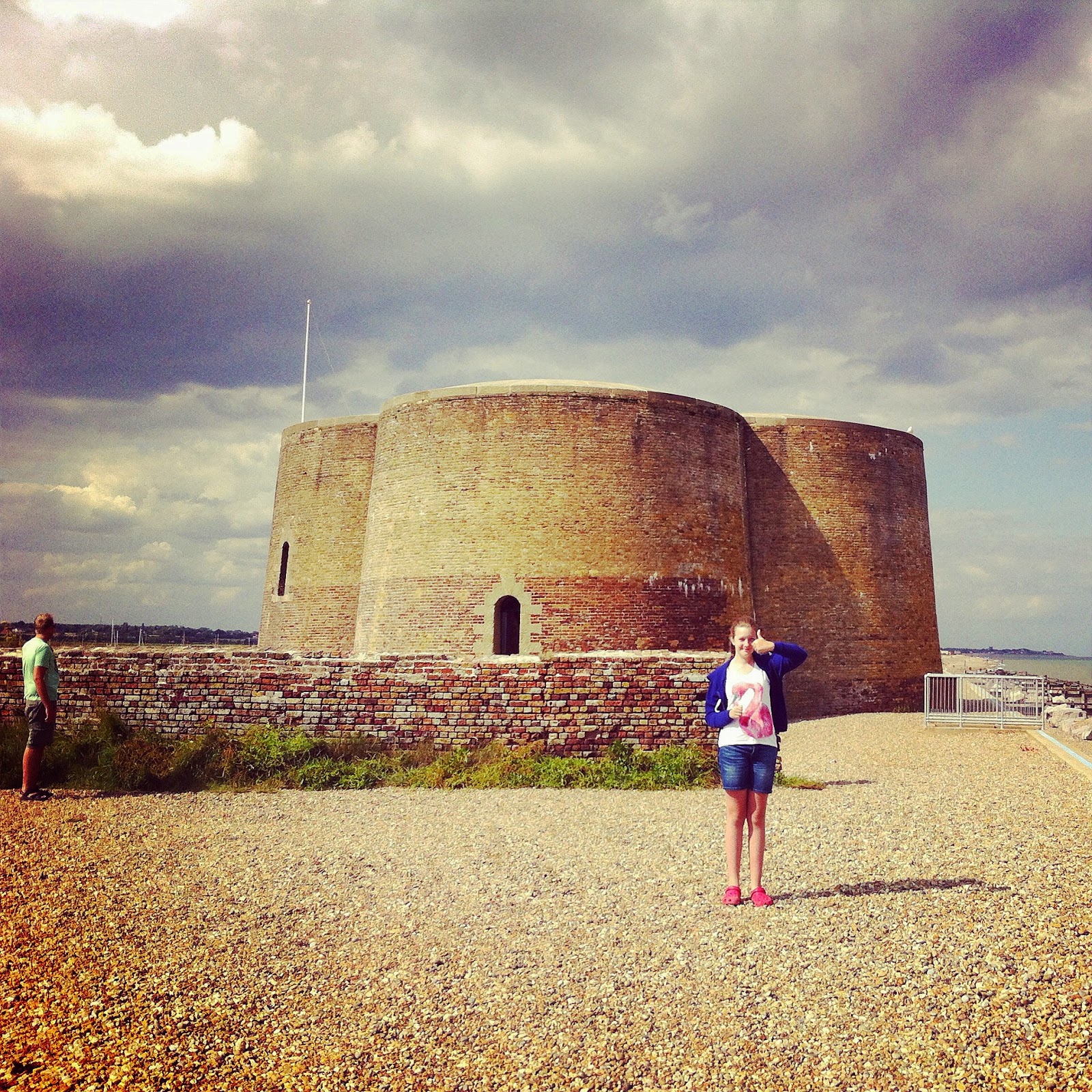 I've also spent a whole week re-decorating Miss Millie's bedroom after breaking my promise to do it last year. Miss Millie and Rosey did offer their painting services now and again too.
I'll show you that handiwork another time. Miss Millie's thrilled with her more grown-up room which is what it's all about. 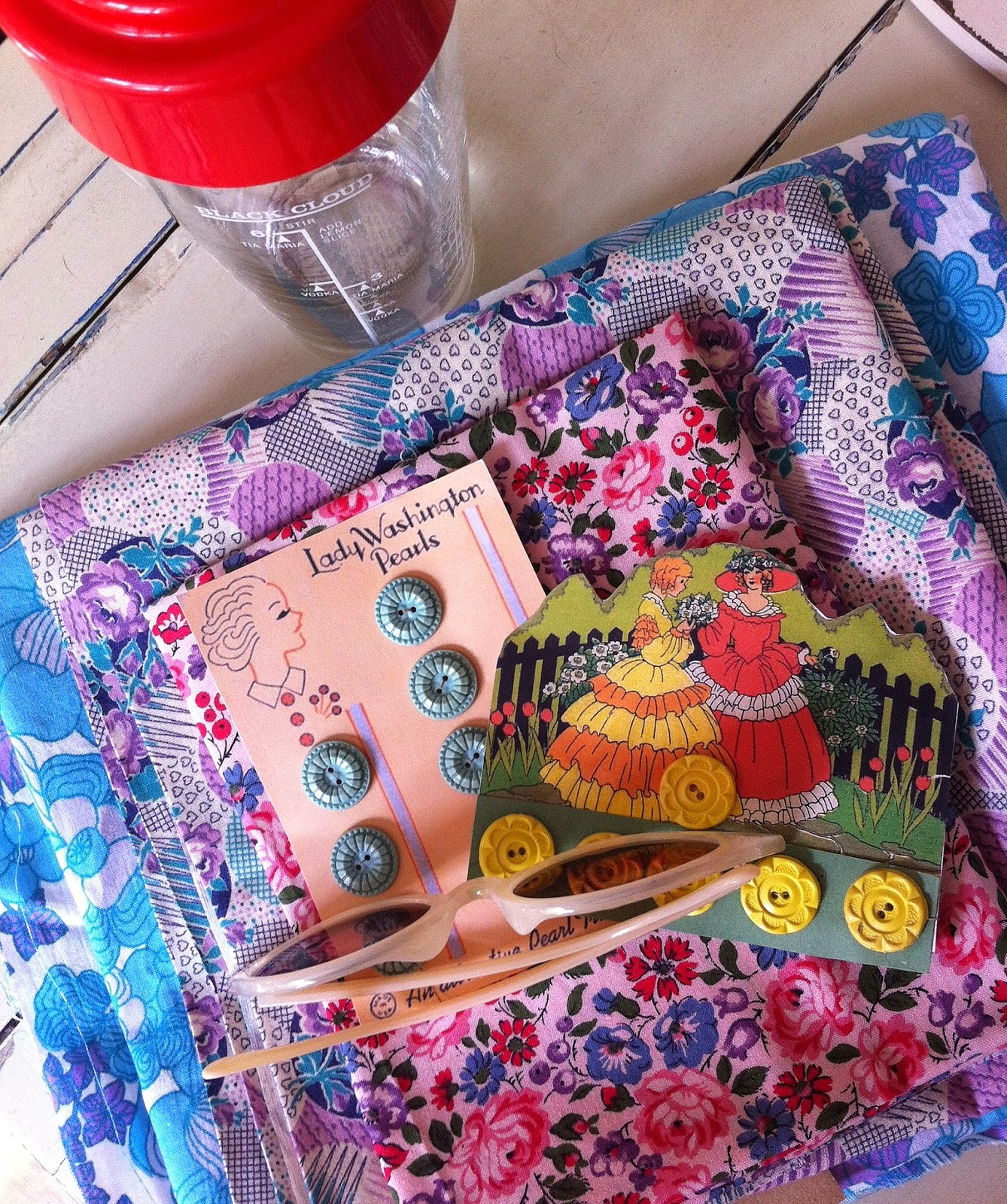 Around all this family and DIY time, I've made sure we visited a few Vintage fairs.

I've thrilled with the beautiful fabrics I've collected together this summer. 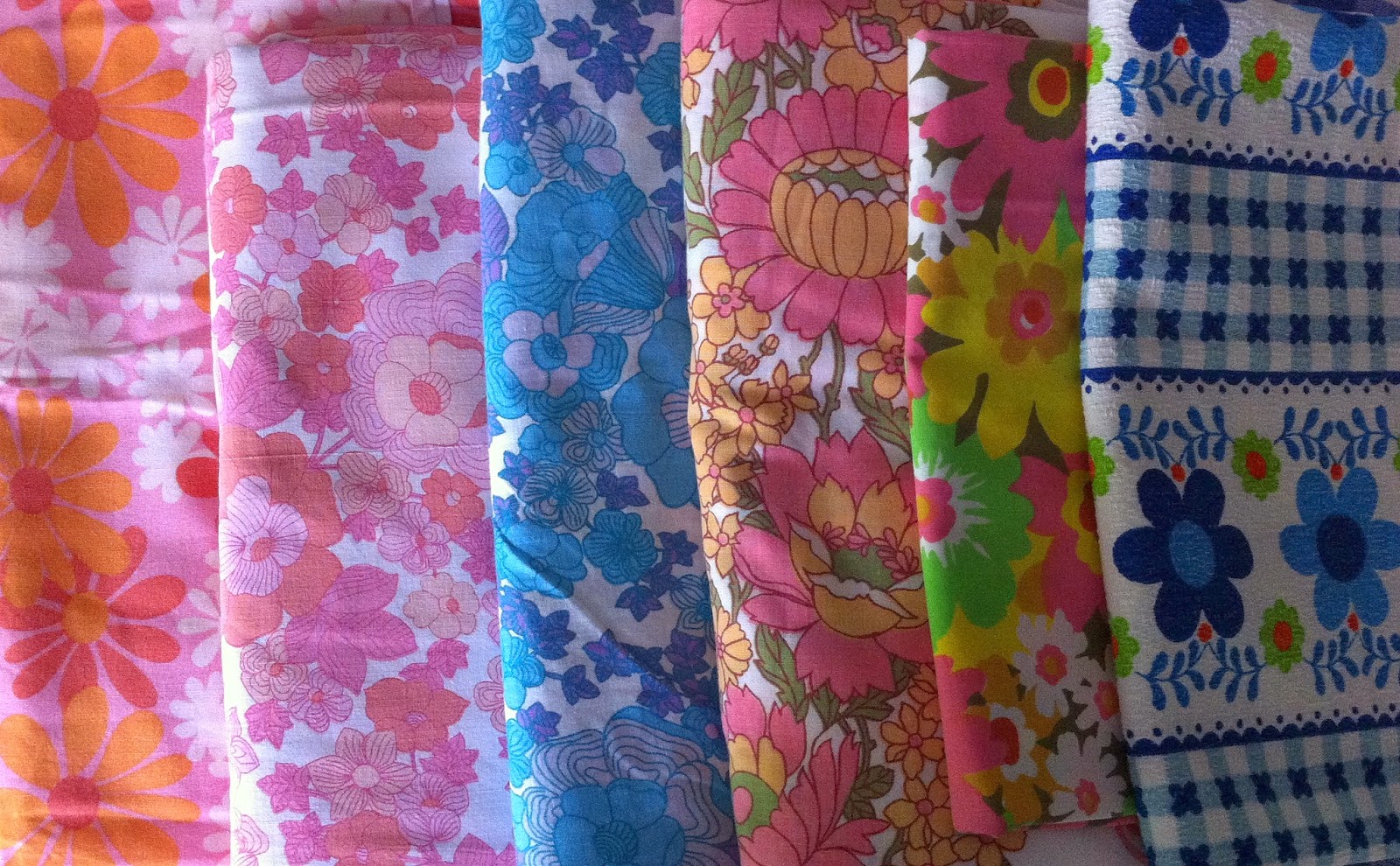 Some were added to this quilt I was commissioned to make just before the end of term.

I have a friend who collects and sells the most fabulous stuff, mainly 60's and 70's happiness. For a long while now she's made it plain she'd love me to make her a quilt and I always said no. I worried about fitting it in around everything else and the pressure of getting it just right for the price I was asking.

Somewhere along the line I said yes, we chatted a long while about how it would be and so off I went to plan, cut and sew. 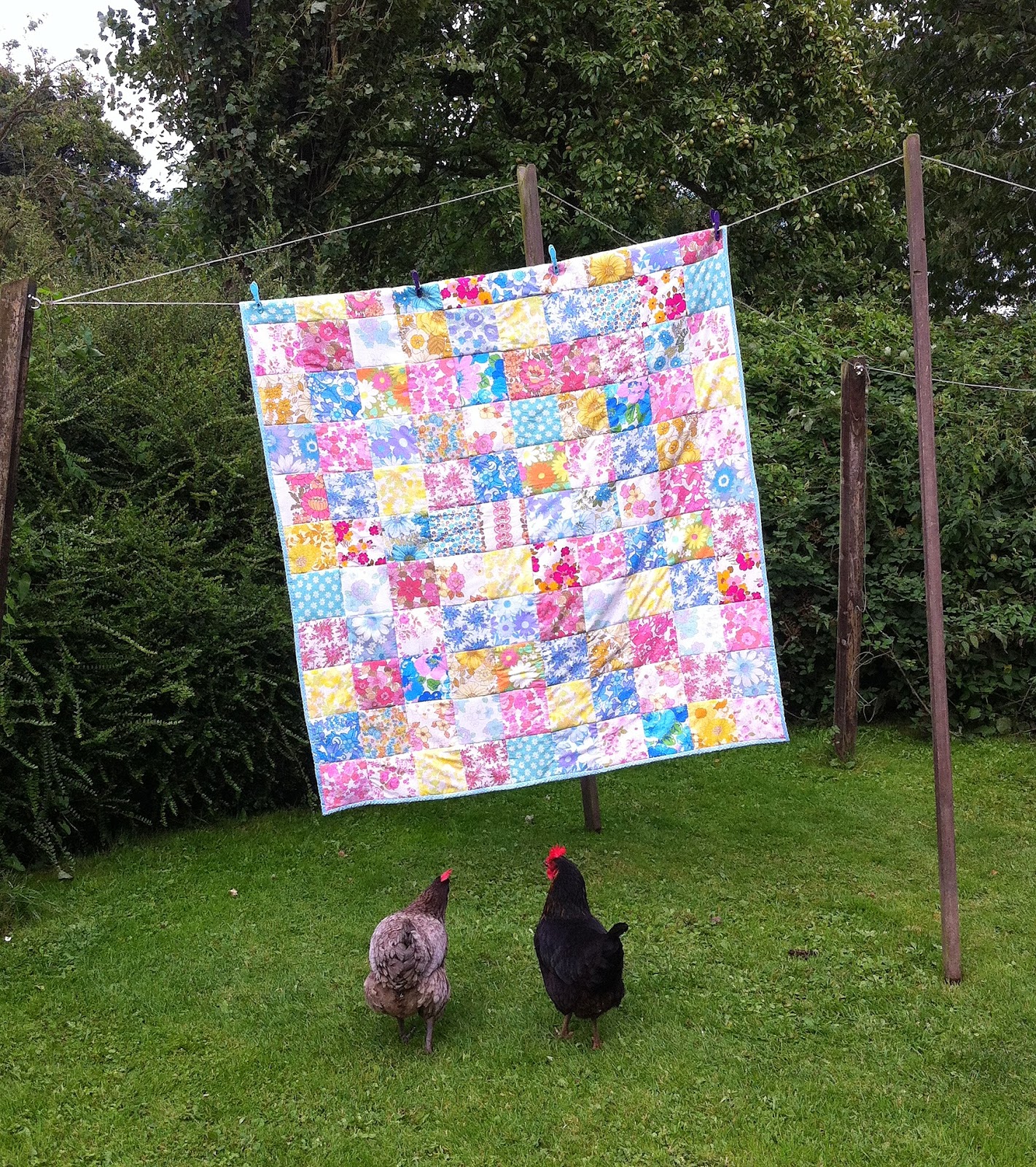 The fabrics and the design were the most important part, the snuggliness and warmth of the quilt came a close second.

To make sure it was cosy enough I used a Witney blanket instead of batting and then a soft as soft can be flannelette sheet for the backing. It made for a heavier than usual quilt, but boy was it cosy. 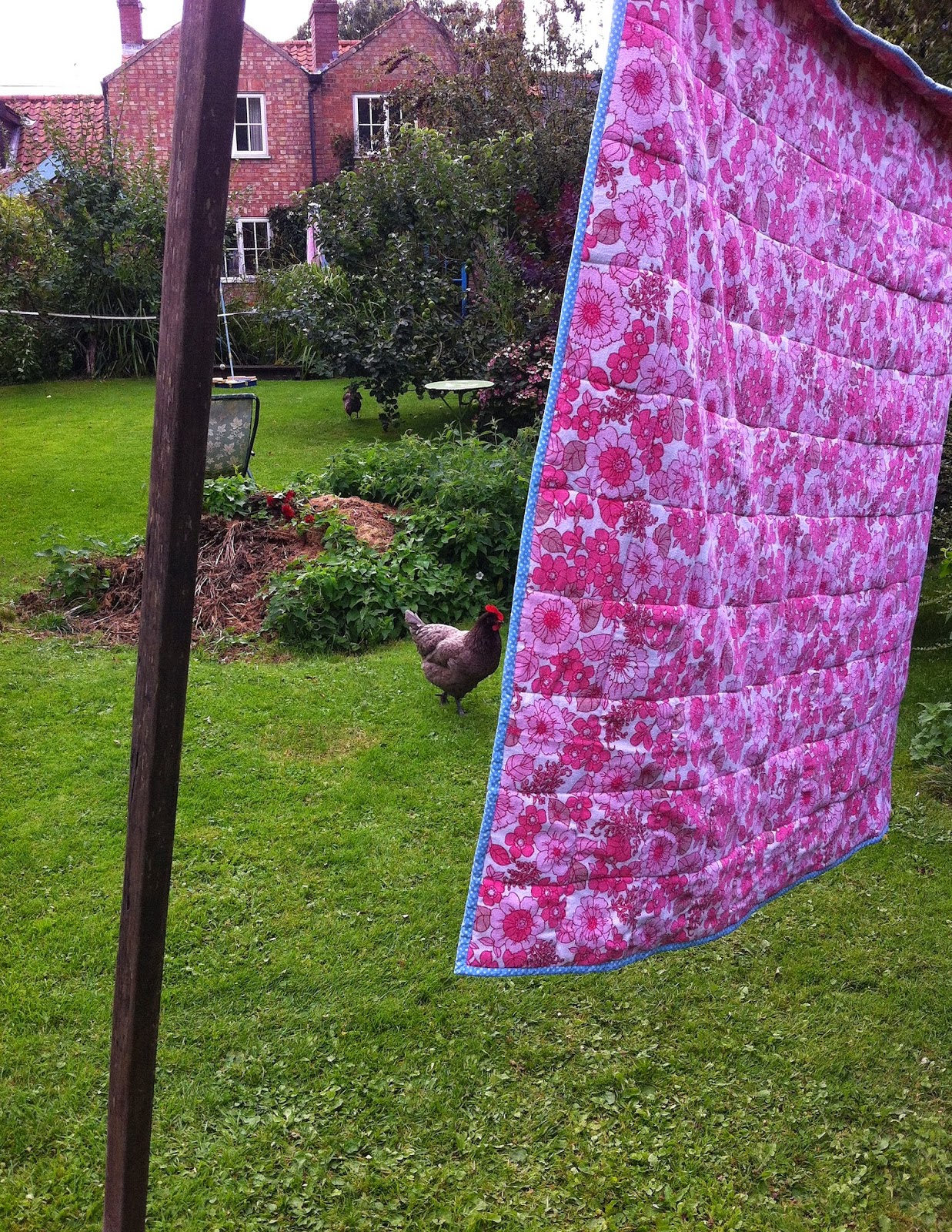 Early one morning, as soon as the hand embroidered label was sewn on the back Emmie arrived to collect.

She was beyond thrilled and so I was too. Phew the relief. 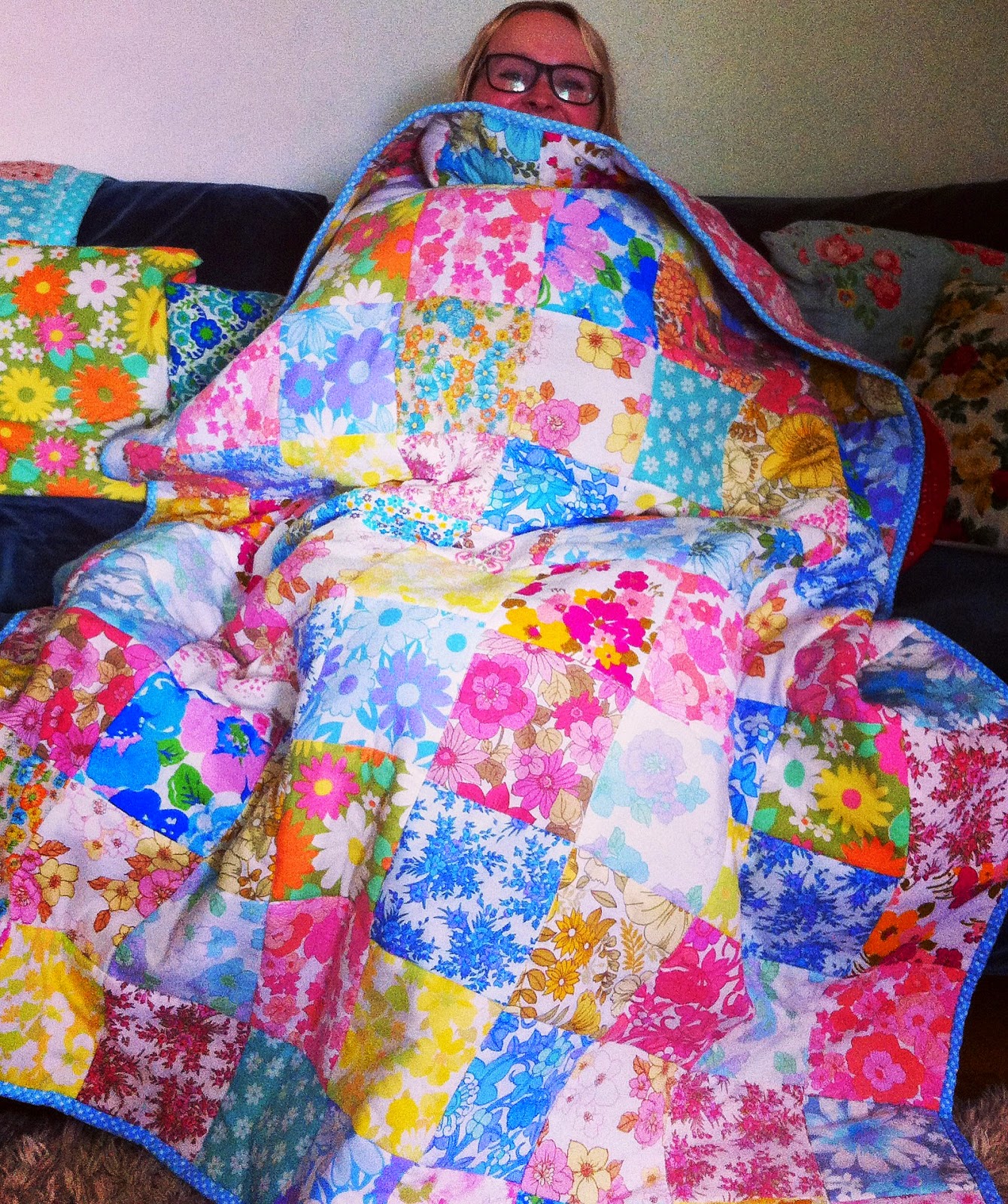 I had an extra surprise of a thank you pressie.
My favourite and much coveted Dolly Days china trio with lollies too. 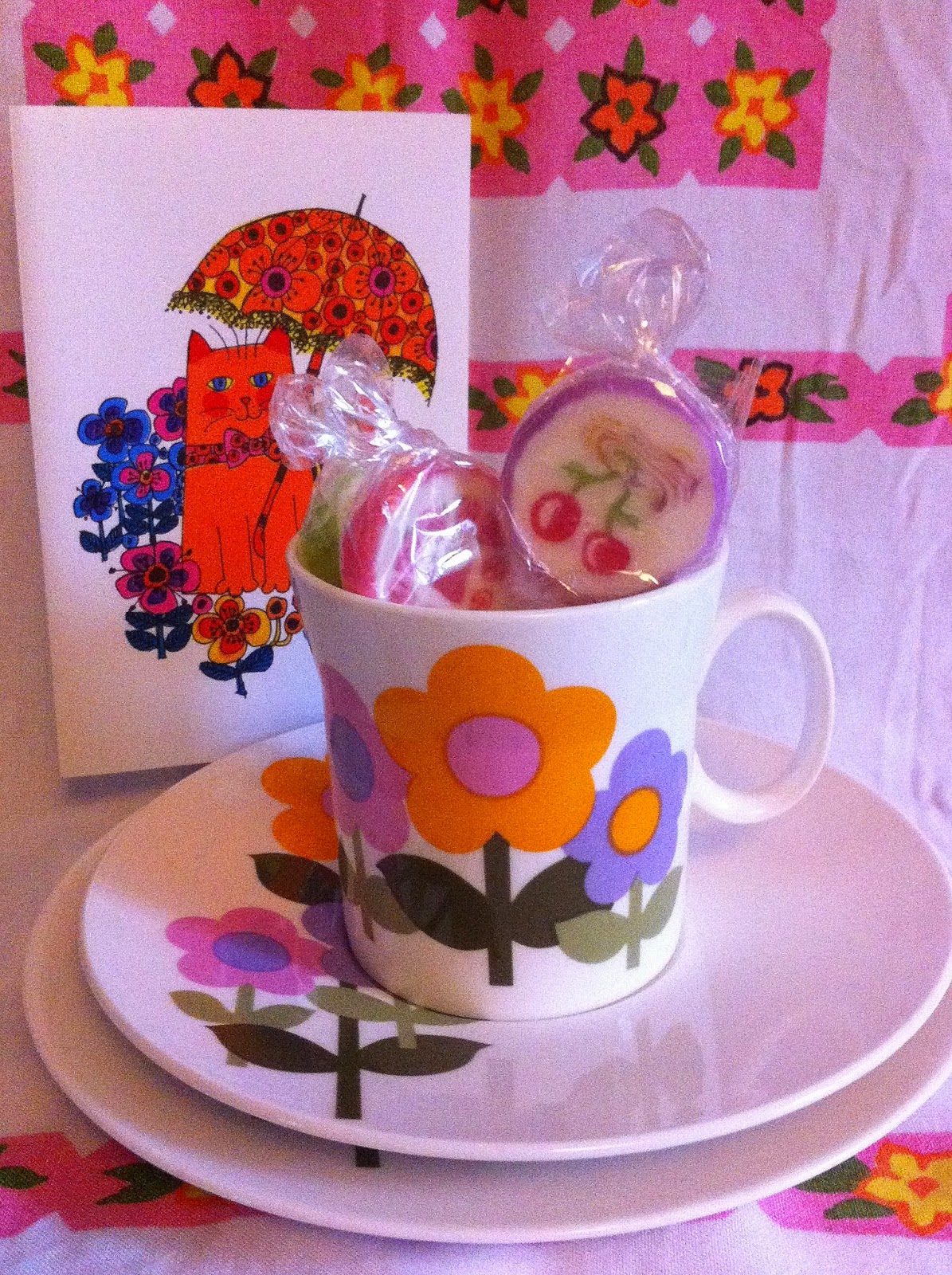 No sooner than Emmie had left than I was back on my machine again doing some me sewing. It was a rainy yuk day and so I thought I'd brighten up the house a bit.

I'd bought a few CK teacloths, along with the fabulous blue modflower print from PommedeJour and they were just the thing to turn into some cheery cushions. 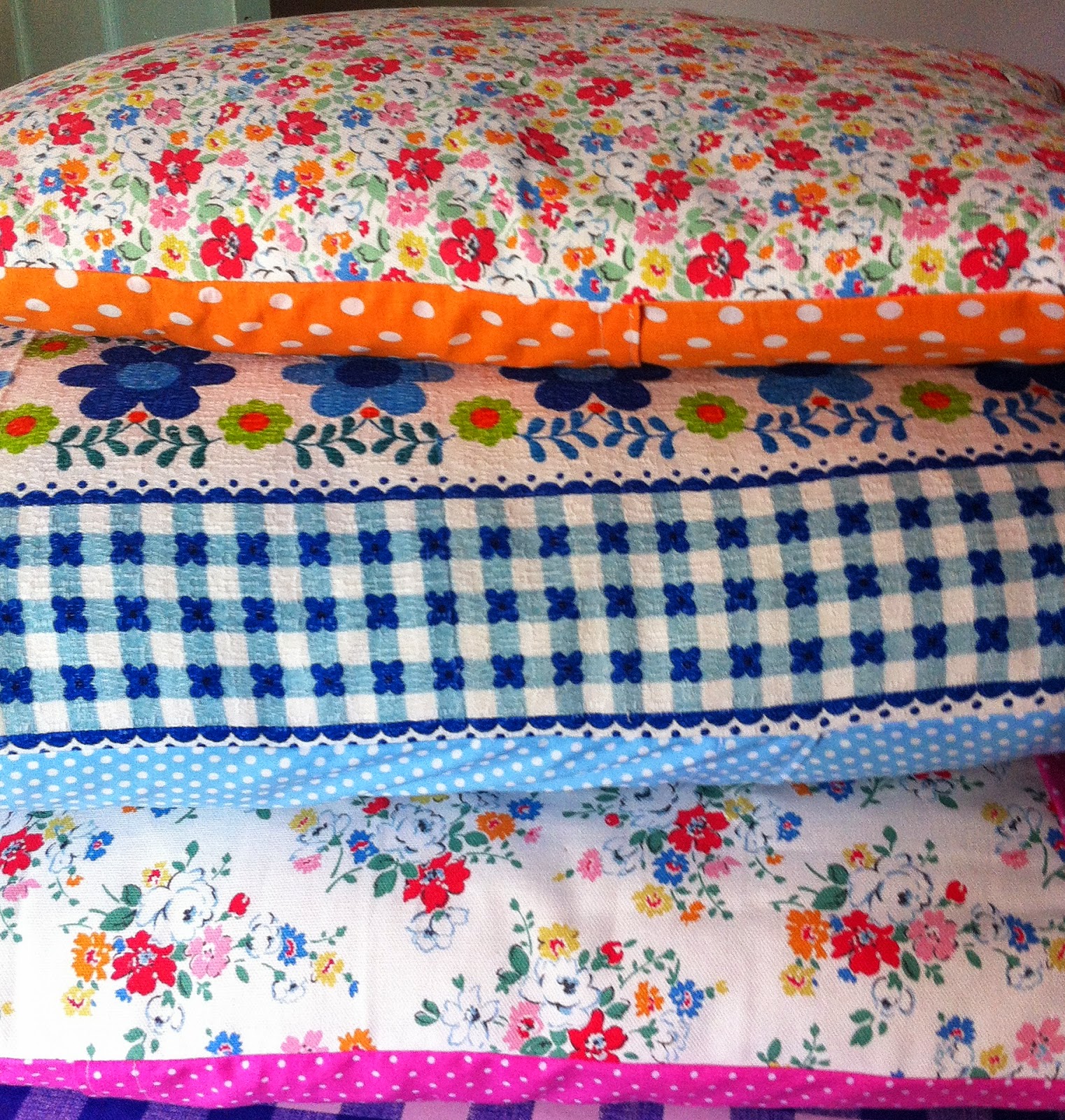 Since then I've made and done quite a few more things, but I think they can wait until next time don't you. 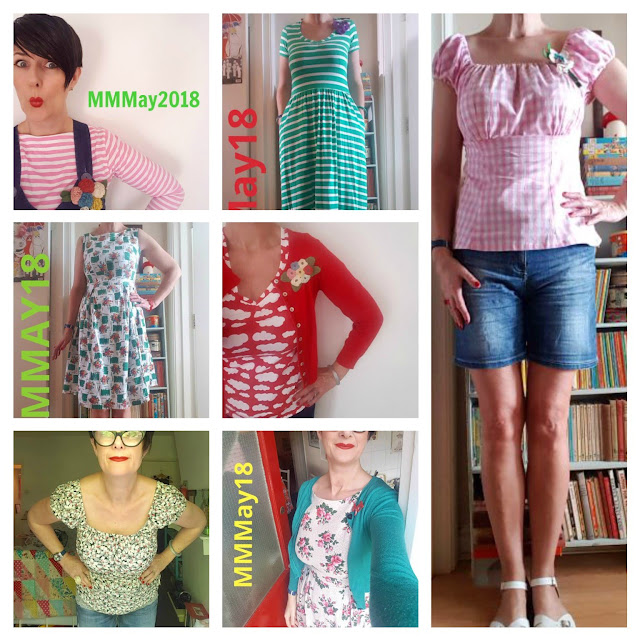 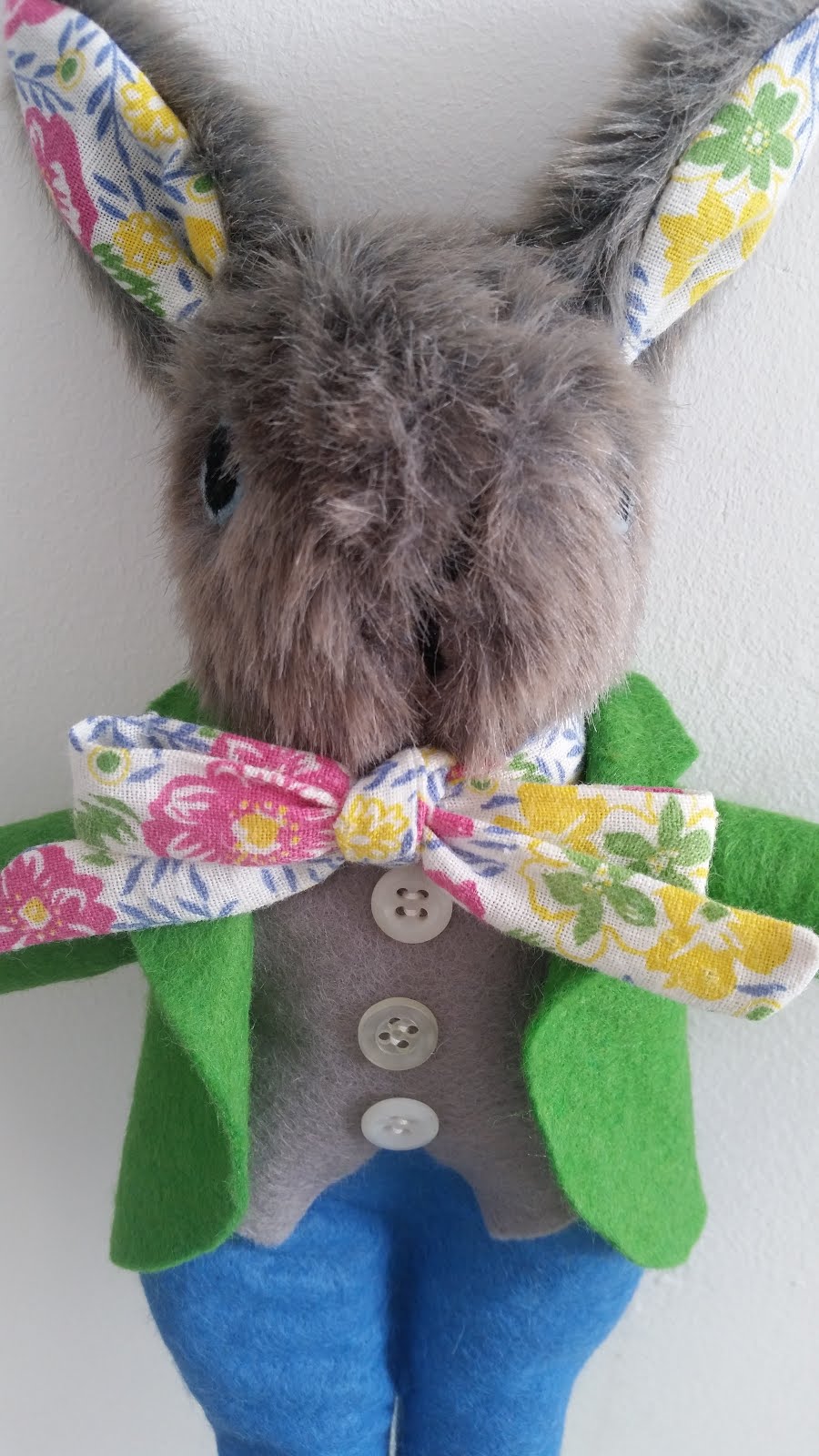 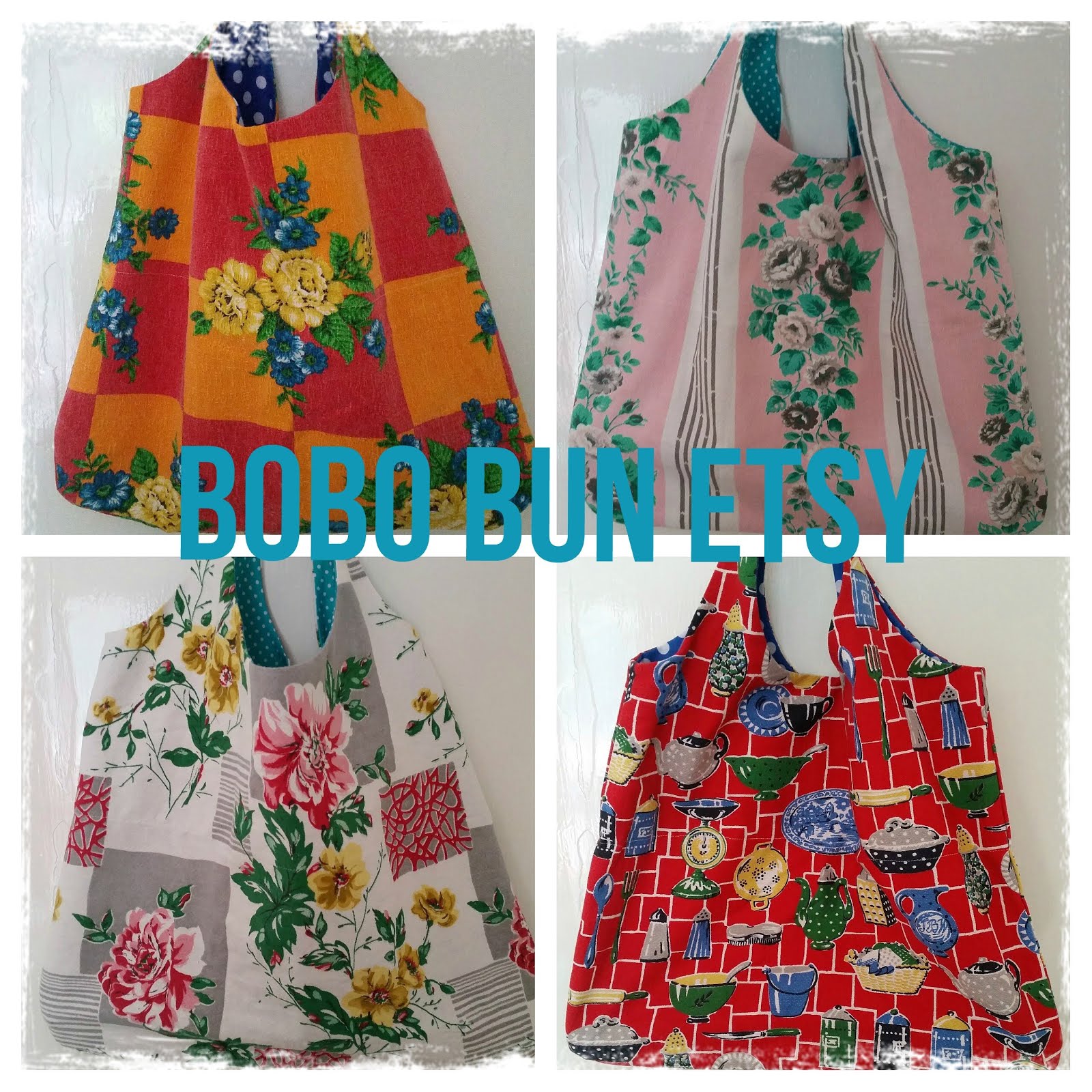